Micron is a semiconductor company founded in 1978, and is based in the United States. The company focuses on manufacturing DRAM and NAND products. It has a market cap of around $68 Billion, and has over 40,000 employees. In this article, we will go through the investment thesis behind Micron, and the factors that could make it a good investment for you.

Micron’s revenue comes from selling DRAM and NAND products, with DRAM making up over 70% of its revenue, and NAND making up the remaining percentage. Their business can also be broken up into the following four segments:

Memory is a Semiconductor Commodity

Micron is in the memory business of the semiconductor industry, and it is important to note that memory chips (unlike CPUs and GPUs), almost function as a commodity. Companies generally do not place much emphasis on whether their RAM is from Samsung, Sk, or Micron. If the specs of the memory chips are the same, the brand of the company they buy those memory chips from is quite irrelevant.

A Recap of The Memory Wars

Throughout the 90’s and the 2000’s, DRAM companies were in a ruthless and brutal pricing war. Despite the industry as a whole growing at a 70% compounded annual growth rate, most companies were not able to profit much, if at all. The big players constantly upped capital expenditure and slashed prices in order to force the smaller players to have to reinvest heavily into improving manufacturing technologies, as well as sell their chips at low gross margins. That meant the smaller players couldn’t cover their operating expenses, or have enough left over to reinvest.

Additionally, this price war was amplified because there were only a few big players with demand for memory chips at the time (HP and Dell), these buyers constantly threatened to change suppliers to keep DRAM prices low.

Now, after a ton of blood and pain in the 90’s and 2000’s, most players, the likes of which included Toshiba, LG, Powerchip, Infeneon, had all been wiped out. In 2012, the new era of the Memory sector began. After the buy out of Elpida by Micron, three players that controlled over 90% of the global market remained: Samsung, SK Hynix, and Micron.

With only three companies left, the industry came to operate a lot more rationally, and the companies benefited from the oligopoly structure. They recognized they could not wipe each other out with price wars as all had substantial cash on the balance sheet, and they did not have to fear new competitors joining the space either. The research & development and capital costs to catch up to these three modern memory chipmakers was massive and would require tons of time.

Perhaps what proved this theory was a situation in late 2016, where DRAM chip prices and profits overall rose for nine consecutive quarters amid strengthening demand. The three companies co-existed and reaped profits for nine quarters straight. Such rational behavior took many by surprise, and 14 suitors alleged price fixing in a class-action lawsuit against the three companies. The lawsuit was eventually thrown out on lack of evidence in Fall 2019, as a Federal judge ruled that there was no price fixing, and that these 3 companies were simply acting in a free-market rational way.

The industry’s rationality was proven again in the 2018-2019 downturn, where memory chipmakers actually reduced capacity and kept prices from a freefall (For the first time!). So while their gross margins and profits tanked, unlike previous downturns, none of the three lost money. Coincidentally, this was also when famous value investor Monish Prabai first bought into Micron, and later Li Lu. They were observing this cycle, and when they noticed how well behaved these memory companies were, they bought in.

Now that we have understood the past of the Memory industry, let’s look ahead to the future. The future growth of this industry is driven by the ever-increasing need for memory in the world today. Memory is required for all the new data centers being built, for all the advances in AI and machine learning technology, for the regular modern vehicles that are implementing more advanced features, for the increasing amount of electric and autonomous vehicles (which require tons more memory than ordinary vehicles), and for the phones that are switching to 5G (5G phones require 50% more DRAM, and twice the NAND). While the memory business will remain cyclical throughout all this, the increasing need for memory combined with a disciplined, rational oligopoly structure, should lead to cycles that consist of both higher highs and higher lows.

Of the 3 players left, Samsung and SK are both headquartered in South Korea. Therefore, Micron has a distinct geopolitical advantage, being the last and only US-based memory manufacturer. This also means that Micron is shielded from any hostilities between North and South Korea, but as we’ll get into in the risks section below, the country isn’t exactly safe from geopolitical tensions altogether. In fact, it has a potentially dangerous exposure to China, Hong Kong, and Taiwan.

There are some risks that come with Micron. To start with, Micron could just be a mediocre business. While the industry is showing signs of being well-behaved, memory is still a commodity-like product, so there’s no guarantee that Micron won’t start losing money during the downcycles like they did in the past. Selling this commodity-like product also means that Micron has no pricing power, which is a characteristic of every great business. In other words, Micron is a good business at best, a mediocre one at worst.

The next risk is that Samsung or SK begin to act irrationally again. While unlikely – given that it is in all of their best interests to co-exist peacefully – it could happen. Perhaps SK’s balance sheet deteriorates and Samsung (the biggest company of the three, and whose memory business can be subsidized by the conglomerate’s other businesses) believes it can force SK out of business by slashing prices, leading to a continuation of the memory wars, that would mean more suffering for Micron as well.

Finally, Micron also has significant exposure to China and Taiwan, and the increasing tensions between those two countries and a possibility of an invasion would be devastating. Here is a map of Micron’s manufacturing facilities: 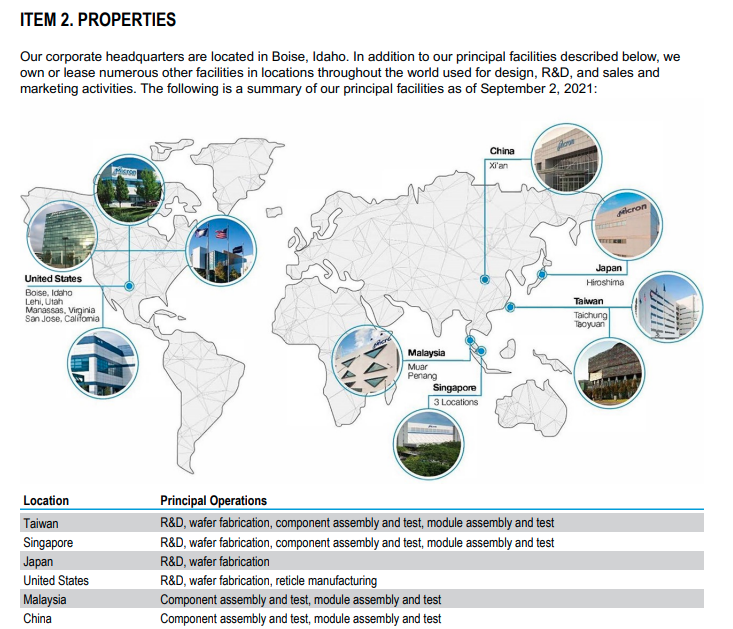 The map shows that Micron has a strong diversity of locations for their production. However, it also shows that their Taiwan branch is one of their most important facilities, tasked with doing everything: R&D, water fabrication, component assembly and testing, module assembly and testing. The china branch is less important, but is still utilized for component and module assembly.

The Taiwan branch is also Micron’s most valuable in terms of its property, plant and equipment:

In terms of its revenue makeup, Micron has been increasingly reducing its China exposure over the past few years as seen in the following table:

When valuing Micron, it is difficult to use a Discounted Cash Flow valuation as the business is very cyclical. This chart shows Micron’s Free Cash Flow since the end of the memory wars in 2012.

There is also another method to value Micron, and this is possibly the better option due to the cyclical nature of the business and the unpredictability of its cash flows. This method is to use the P/B ratio.

The key to profiting off Micron would therefore be to buy when P/B approaches 1.0, and sell as it goes above 2.0. In other words, buying near the bottom of the cycle, and selling near the top. Currently, Micron is selling for $60 a share, at a P/B of 1.40. This is a good entry point, but the lower the price goes, the more attractive the stock becomes. A stock price of $43 would represent a P/B ratio of 1.0, which would be an extremely attractive price. The key is not to time the bottom though, no one knows whether a P/B of 0.8, 1.0, or 1.2 will be the bottom. It is a good idea to buy in tranches as the P/B falls toward 1.0, and perhaps enter your last tranche if it reaches 1.0.

Additionally, keep in mind that Micron’s book value will also grow over time.

Micron’s book value, as well as its tangible book value, have grown at a compounded annual growth rate of around 12% over the past 4 years.

If we assume the following:

Of course, this is no guarantee. Micron’s book value growth might stagnate, or the cycle may take longer than 5 years to revert, but this is a rough estimation. Additionally, to reiterate what was said above, the lower the price, and the closer the stock gets to book value, the better this investment will be.

Micron is a memory chip manufacturer who survived the memory wars and is now reaping the benefits in a well-behaved oligopolistic industry. As an industry, memory has plenty of secular growth drivers from the likes of EV vehicles to 5G phones, the increasing need for more data centers, and for AI and machine learning developments. There are risks associated with Micron mainly around China-Taiwan geopolitical tensions, the cyclicality of the industry, and Micron’s lack of pricing power. Therefore, one needs to consider these risks in evaluating how comfortably one can purchase such a company.

Currently, Micron is trading in the lower range of its book value, making it an attractive purchase for those looking to play the cycle. As it drops closer to its book value, the more attractive the company becomes, the more you may want to consider becoming an owner of this business.

Google – The Best Business in the World?