Goods are items that satisfy human wants and provide utility. The key distinction between a good and service is that a good is transferrable, meaning that it can move location without changing what it is.

Because so many things can satisfy our wants, and different goods provide different levels of quality of utility, it is necessary that we use different systems to classify these goods. Generally, goods are classified in four ways.

Secondly, goods can be classified by the way their consumption impacts consumers. This classification divides into two categories – merit and demerit goods. A merit good is a good that has some extra benefit associated with it that the consumer may not necessarily know about – it is better than they think. This can be things such as education, healthy foods, etc. For this reason, governments tend to subsidize merit goods in an attempt to get more people using and consuming them. On the other hand, we have goods that have unknown harms – they are worse than the consumer thinks. Examples include cigarettes, gambling, alcohol, and hard drugs. For this reason, the government will try and make them more expensive by taxing them, or outright banning them, in an attempt to negatively influence the levels of consumption.

A third way that economists classify goods is by assessing them using a two factor system of the nature of their access to the consumers. They can be classified as follows:

Sometimes, goods can characterize themselves as different types of goods depending on how much they are being used. Consider a public beach that you and your friends have discovered. It has no one on it, except you, and it is 2 miles long. If a dozen or so people come to your beach, that is fine – it is non-rival and non-excludable, indicating that it is a public good. Now imagine your beach has 10,000 people on it – this has arguably diminished your experience at the beach. Now, you can either accept this, and now the beach is a common good (it is rival), or you can put a fence around the outside and charge people to come in. Again, if you have a small number of people (say a limit of 100 people, that way everyone on the beach is still at their maximum utility), that is a club good (non-rival, excludable), but if you charge a price, then everyone just buys a ticket and comes in anyway, then that could be considered a private good (excludable, rival). This also happens to be an example of the tragedy of the commons. As you can see, the act of classifying goods is not always straightforward. 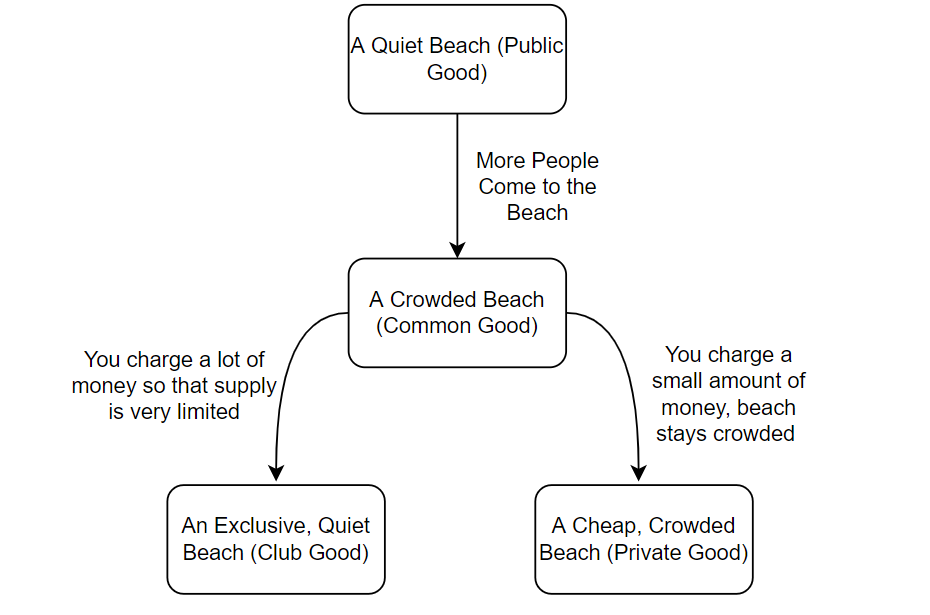 The final way that we will discuss how to classify goods is regarding how they are used. Is the good used to create other goods, or is it used to provide a consumer with some utility? If the good is of the former type, then it is called an intermediate good, or a capital good. These are not included in GDP calculations because that would cause double counting. Examples include machinery, seeds for produce growing, and raw leather. Final goods are the product of the capital goods that are meant to be consumed. For example, a microwave or a bicycle are final goods.

In the systems above, the way good was classified was not dependent on how consumers reacted to changes in price, supply, or demand. It was assumed that these goods would either just be normal or inferior goods. It was also assumed that they would follow a normal price/demand curve – as the price increased, demand would drop, and vice versa.

But what if this wasn’t true? What if there were some goods whose demand increased more and more as the price was increased. Well, there are two types of goods that do this, although they do it for very different reasons.

Firstly, Veblen goods, or “snob goods”, are goods that are seen as luxurious, exclusive, and high quality. People buy them because of their high price, and this gives them more status because they own it. Examples could include expensive art or wine, luxury watches, and cars, or rare collector items. Note, it is important that Veblen goods have limited supply, not just a high price tag. A Gucci handbag may not be a Veblen good just because it is expensive and seen as a status symbol – the demand would surely rise if the price dropped. A true Veblen good would see demand fall if it were to become cheaper.

Secondly, Giffen goods are low-income, non-luxury products found almost exclusively in poor countries. When the price for some necessary staple item, such as bread, increases, the demand for this item increases too. Why would this happen? Why don’t the consumers just go and buy something else? Because Giffen goods necessarily have no alternatives and are a necessity for most people. Take bread as an example. If the price of it started increasing, people would be spending more and more money on it while just maintaining their old total purchasing amount. Because of this, things such as meat, vegetables, etc. would become luxury items, and their demand would decrease. Because in this case, the people cannot live without the bread, and cannot turn to something like potatoes for the carbs, the increase in price lead to an increase in demand as they buy bread instead of meats, vegetables, etc.

Goods are strange things once you look past the fancy wrappings, the colorful pictures on them, and the endless shelves of substitutes at the supermarket. While they may seem mundane – you buy something because you need or want it, there is a whole world of the theory behind every single purchase you make. Have you bought more or less since you got a raise? Are you buying it because it is a status symbol? Do you need it badly, and are you willing to forego some other things to buy it? Ask yourself these questions next time you shop and see how many different ways you can classify the goods.

To learn more about types goods, their classifications, and microeconomics in general, click here.